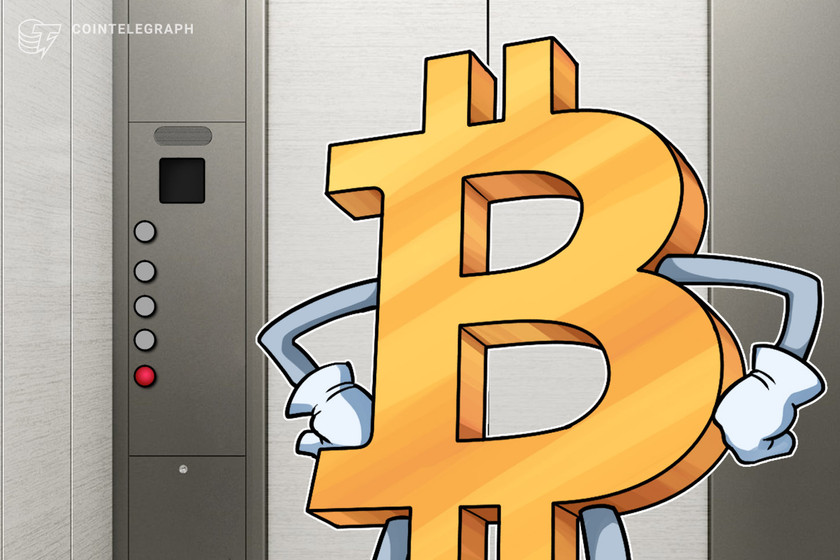 More than $6 billion worth of Bitcoin is now tokenized on Ethereum as WBTC.

One percent of Bitcoin’s circulating supply is currently tokenized as Wrapped BTC (WBTC), equating to nearly $6.2 billion worth of BTC.

The milestone was acknowledged by the product manager of crypto custody firm BitGo, Kia Mosayeri, who tweeted the news on June 7. BitGo is the custodian for the Wrapped Bitcoin protocol, which was launched its Bitcoin-backed ERC-20 token WBTC on Ethereum in January 2019.

1% of all BTC has been wrapped into $WBTC! https://t.co/jOi0LZZUyi

According to Etherscan, there are currently 187,610 Bitcoins wrapped on the protocol, equating to a fully diluted market capitalization of $6.18 billion. The current circulating supply of BTC is nearly 18.73 million, according to CoinGecko, confirming the 1% milestone.

BTConEthereum estimates there are 240,620 Bitcoins that have been tokenized across various protocols for use on Ethereum, representing a combined capitalization of $7.91 billion. Wrapped Bitcoin exerts a clear dominance over the sector, representing 78% of all Bitcoin tokenized on Ethereum.

Other leading Bitcoin tokenization protocols include second-ranked Huobi BTC with 37,906 BTC or 15.7% of the Bitcoin's supply, and the third-ranked RenBTC with 10,226 tokenized BTC. Synthetic BTC also holds 1,471 BTC, followed by imBTC with 1,169 Bitcoin, and TBTC with 916 BTC.

The recent proliferation of yield farms and interest-bearing Ethereum-based DeFi protocols supporting tokenized BTC has been the primary force driving the sector’s growth.

In late April, Ethereum-based BTC yield protocol BadgerDAO teamed up with RenVM to launch a bridge between renBTC and its own yield farms. DeFi Llama estimates that more than $540 million worth of assets is locked on the BadgerDAO platform.

Nearly 1% Of Bitcoin Supply Is Now Wrapped In Ethereum

As wrapped Bitcoin approaches 189,000 BTC, the leading form of BTC on Ethereum now makes up for nearly 1% of the total supply of the cryptocurrency. The total supply of WBTC was only around 4,000 coins last June, and today it is 47 times that. The gigantic growth has made the token the most popular […]

1.3% of Bitcoin’s supply has now been wrapped onto Ethereum

A growing percentage of bitcoin is being locked up and used on the Ethereum blockchain, through various tokens. The post 1.3% of Bitcoin’s supply has now been wrapped onto Ethereum appeared first on The Block.

More than $6 billion worth of Bitcoin is now tokenized on Ethereum as WBTC. One percent of Bitcoin’s circulating supply is currently tokenized as Wrapped BTC (WBTC), equating to nearly $6.2 billion worth of BTC. The milestone was acknowledged by the product manager of crypto custody firm BitGo, Kia Mosayeri, who tweeted the news on June 7. BitGo is the custodian for the Wrapped Bitcoin protocol, which was launched its Bitcoin-backed ERC-20 token WBTC on Ethereum in January 20

On April 21, Bitcoin network fees touched an all-time high according to a number of transaction fee aggregators. The average bitcoin transaction fee is approximately $59.88 and the median fee is around $26.44 USD per transfer. Bitcoin Fees Climb Sky High After the Hashrate Plummeted The cost to send a bitcoin (BTC) transaction has never […]

Unique addresses in DeFi increase 10X, here’s why that matters

With the launch of new DeFi ETFs, DeFi tokens are seeing a surge in interest even in comparison with NFT marketplace tokens and top altcoins. Though gas fees were considered as a hindrance to institutional adoption of DeFi, ETFs have increased investment inflow, both retail and institutional. DeFi’s TVL has increased to $57.9 Billion, the growth […]

Synthetic crypto assets offer vast potential to shake up the crypto and traditional financial markets, but what’s behind the current growth? Amid all the excitement of crypto’s biggest bull run in history, some assets have been outperforming even the current high-performing market. In particular, Synthetix (SNX) has been on an epic tear, leading the growth of the whole niche. The news of a Coinbase listing in December helped account for some of this. However, at the time of w

Bitcoin briefly loses its spot as top cryptocurrency — Wait, what?

Bitcoin's twin took over the number-one spot on CoinMarketCap. Bitcoin's market capitalization was briefly flippened today as Wrapped Bitcoin suddenly gained quadrillions of dollars in value. But crypto aficionados and maximalists need not worry: The move was a glitch on CoinMarketCap, which briefly displayed Wrapped Bitcoin (WBTC) as worth more than all other assets in the world combined. WBTC showed a behemoth market cap of about $432 quadrillion for a brief period (the tot

Nearly 100 DeFi-friendly WBTC have already been minted as TRC-20 tokens on Tron.

According to onchain statistics, there is a colossal amount of bitcoin, approximately 141,231 bitcoins or $3.3 billion at the time of publication locked into Ethereum-based tokens. There are roughly seven different wrapped or synthetic bitcoin tokens but the Wrapped Bitcoin project has the lion’s share of coins with 115,411 under custody. At the time of […] The post Side-Chaining $3 Billion in Value: There’s More Than 141,000 Tokenized Bitcoins Issued on Ethereum appeared first on Bitcoin News.